How to Effectively Improve Your Hearing Ability and Health

Standing tall: how to improve posture

Top 10 Reasons To Eat Brussels Sprouts: They Are So PHAT!

Maria Lorenzhttps://ifitandhealthy.com
Join me on my "I Fit and Healthy" journey! Maria is an Upstate New Yorker interested in all things healthy-living related! She started the "I Fit and Healthy" Blog to document life and her pursuit of healthy living. By day she work in digital media and advertising. By night she’s a first-rate wife and mom of two crazy little girls! She is self-proclaimed addicted to her iPhone/iPad and always on the hunt for the latest health tools and fitness gadgets. 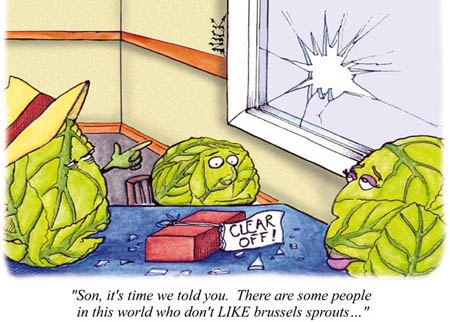 Years of public humiliation did its dirty deed to convince us not to eat Brussels sprouts. Experts seem to disagree on the specifics, but the facts are straightforward. Through the years, there was a campaign to discredit this little Cruciferae’s darling. In 2002 Brussels sprouts were named UK’s most hated vegetable, but it does not stop there. According to some sources, derogatory jokes continued over many years.

1910 – “If one were in a capricious mood, one could refer to the youthful protagonists as a pair of Brussels sprouts”

1960 – [Leave It to Beaver: Season 4] – “In the season opener “Beaver Won’t Eat,” Beaver (Jerry Mathers) and his mom June (Barbara Billingsley) form a closer bond than ever before — and it’s a plate of Brussels sprouts that causes it all”

1992 – [Full House: Season 6] – “Joey returns home from grocery shopping, commenting that he felt bad for the Brussels sprouts, so he bought them”

Okay, maybe I am just a little paranoid and there is no conspiracy here. Yet, Brussels sprouts just do not seem to get our respect. Allow me to speak in their defense.

This little, cute, nutritional powerhouse in the mustard family was first cultivated in 18th century Belgium. It was not easy for them to sustain culinary appeal, but they had the goods to back it up, and I am happy they are still with us today.

Brussels sprouts are loaded with vitamins and nutrients. Just one serving will exceed your RDA for vitamin C and K. With only 6 grams of effective carbs, they are low in carbohydrates, but deliver a powerful fiber punch.

If that is not enough for you to give Brussels sprouts much deserved respect, by incorporating them in your diet, consider this. Plant phytochemicals in Brussels sprouts support your immune system against disease, including cancer. Sulforaphane found in Brussels sprouts helps enzymes in your body to clear carcinogens. Researchers in Netherlands found out that a diet reach in Brussels spouts decreases DNA damage by 28%.

If you are pregnant or thinking of becoming pregnant, you may want to know that deficiencies in folic acid have been linked to birth defects, but these miniature cabbages will give you a pretty good amount of it.

Soluble and insoluble fiber are world famous when it comes to weight loss, satisfying your hunger and protecting your colon against colon cancer. Guess what? Brussels sprouts have almost equal amounts of both, delivering a whooping 6 grams of it, which is considered high for a vegetable.

At the end, I cannot make you eat Brussels sprouts any more than Michael Marks can make you laugh when you read his “Top 10 Reasons to Eat Brussels Sprouts”. Although, for some reason, I seem confident you will give them another shot.

10. You do not know anyone named Brussels

9. They are easier to eat than putting on a wet suit at the bottom of swimming pool

7. You will be the talk of the dinner party, cuz you are the only one there who loves Brussels sprouts

6. Tastes better than anything eaten on “Fear Factor”

4. If you are a kid, your parents will let you play more X-Box

3. Ken Jennings, the guy who won all that money on Jeopardy, he loves Brussels sprouts

2. It is the only sprout that’s never been linked to some food borne illness like salmonella

1. You can bet your friends you can eat 10 heads of cabbageâ€¦in less than 60 seconds, and win

This Brussels sprouts garlic recipe is an excellent way to get started. It is easy to prepare and tasty.

Have you been “flirting” with Brussels sprouts lately? I cannot wait to hear your stories.

How to Effectively Improve Your Hearing Ability and Health

Standing tall: how to improve posture